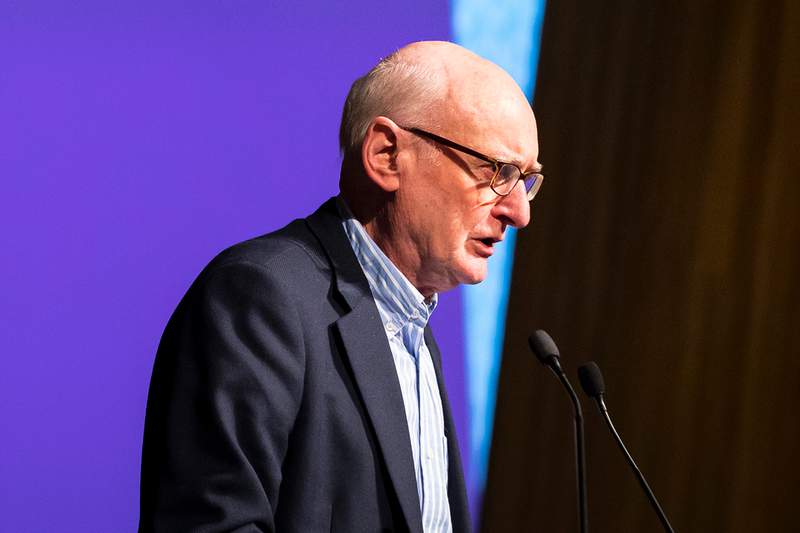 Among the presenters at the 2022 delegates conference in June was Mr Julian Gardner AM, a lawyer who is chair of the Voluntary Assisted Dying Implementation Taskforce. Mr Gardner gave a brief update on the state of VAD in Victoria – its successes and remaining challenges, and considerations for healthcare workers – before answering delegates’ questions.

It has been three years since voluntary assisted dying was legislated in Victoria. ‘The report card at the end of three years is a very good one,’ Mr Gardner said.

‘There are some problems with the legislation, which is due for review in a year’s time. Some of these problems will easily be amended; others will be contentious. But in the meantime, I’m happy to report that it is operating safely, in the way in which it was intended, and it has provided compassionate care in relieving suffering to a large number of Victorians.’

How does VAD work, and who can access it?

‘The most critical word is the word voluntary,’ Mr Gardner began. ‘To access VAD, a person must have decision-making capacity, and it must be an informed decision – they have to be informed about all the risks and benefits, and the options for treatment including the option of palliative care.

‘That death must be expected to occur within six months or, in the case of neurodegenerative conditions, 12 months. They must be experiencing intolerable suffering. They must be acting without coercion. And their decision must be enduring. They have to make three requests and there must be nine days between the first and third request.

‘They must be assessed by two doctors who have undertaken the relevant training in voluntary assisted dying law and practice. These doctors must be independent of each other. And one of those two doctors must be a specialist in the medical condition that is causing the imminent death.’

Assuming that the person who is assessed by those two doctors is eligible for VAD, the doctors must then submit an application for a permit to prescribe the medication. In Victoria, all of the medication is dispensed by a central service located at The Alfred and the pharmacists there deliver it to the person, wherever they are in Victoria, free of charge.

There are two ways in which the medication can be administered. One is by self-administration, which involves drinking a small amount of liquid; the second is administration by a medical practitioner. That can only occur if the person is physically unable to lift the glass and drink the liquid or if they are unable to digest the medication.

Finally, a health practitioner cannot initiate a discussion about voluntary assisted dying. The person themselves must ask you for information or advice about it.

‘One would hope there’s an established policy [at your workplace] that tells you what to do if somebody approaches you about this,’ Mr Gardner said. ‘It may be that there’s a coordinating person who can take over if you don’t feel comfortable in talking about it.

‘The other alternative is that there is a state-wide care navigator service, run by some very experienced nurses, who you can call and who will give you advice and information. They also provide a lot of assistance in helping people make links with medical practitioners who are willing to be involved in in making the assessments. So it’s worth remembering that service.’

Going into more detail, Mr Gardner explained that the Act has over 60 safeguards, which ‘the premier at the time described as being the most conservative and restrictive legislation in the world’.

The safeguards address many of the concerns that were raised in the lead-up to passing the legislation. These included concerns about the risks of:

‘There were so many of these objections that it seemed impossible to provide a safe system,’ Mr Gardner said. ‘But there have been no reported incidents of any of those potential risks. And that is why I say that the system has operated safely. It has achieved its objective, and is still achieving that objective, of providing compassionate care in reducing suffering.’

So far, the number of Victorians who have successfully accessed VAD as an end-of-life option is around 300. But Mr Gardner emphasised that the success of the system is not measured in numbers but rather by the relief of suffering.

Benefits also accrue to the family and loved ones, Mr Gardner noted. ‘Prior to this legislation, the coroner estimated that there was at least one suicide every week in circumstances where the person would otherwise have qualified for voluntary assisted dying. So not only are [relatives] spared the terrible consequences of somebody’s suicide, but also they received the benefit of knowing that their loved one made a choice, curtailed their degree of suffering and was able to choose their time while they still had capacity, and to say their farewells.’

They have also received feedback suggesting that even in families where there wasn’t initially support for a person’s decision to access VAD, ‘they subsequently said that, in fact, it was a great comfort to them.’

The system has not been without its problems. For the most part, these have related to access. There is a Commonwealth law, for instance, that prohibits the use of telehealth in discussing and advising on voluntary assisted dying. Similarly, there are challenges for those in rural and regional areas to access relevant doctors, particularly specialists.

Other issues have been caused by lack of understanding about the process, and how lengthy and complicated it can be. ‘Some people are under the mistaken belief that they can walk into their doctor and get a script, and hence they leave it too late.’

And unfortunately, there have been some instances of obstruction, Mr Gardner said. ‘The Act provides for any health practitioner with a conscientious objection to take no part in any aspect of voluntary assisted dying. That is a very important safeguard that I fully respect and support. However, there’s a difference between not wanting to be involved and actively obstructing somebody from being involved.’

Some of the opposition comes from the palliative care sector, which is an issue given that more than 80 per cent of those who seeking to access VAD are receiving palliative care. ‘But it’s important to recognise that VAD is not an alternative to palliative care; it’s simply one more option.’

What is put on the death certificate as cause of death after VAD?

Have there been any disputed estates as a direct result of assisted dying?

Is there an expansion of the GPs who are signatories?

There are some 600 medical practitioners who have completed the training. That number has grown by at least 20 per cent over the last 12 months. The greater problem tends to be with access to specialists.

Do you anticipate an improvement in the timeframe it takes to access VAD?

I think there are some signs that it will. It can take quite a long time, if for instance there are problems in getting an appointment for a consultant assessment and so forth. But early on, there were a number of problems with what I would call minor errors in the paperwork – spelling someone’s name differently etc, and that created a hold up.

We’ve since made a number of changes to the computer system and also, because the permits are issued by the Secretary of the Department of Health, a number of changes in their processes. So it can take longer than people expect. But there has been an improvement.

Does the telehealth issue require federal government change, or changes to the Victorian legislation?

It does require a change to the Commonwealth legislation. I’ve spoken to the new attorney general personally and I know he’s had many written submissions. We are hopeful it is something that the Commonwealth Government will take action on.

Is there a timeframe for the use of the medication?

No, it doesn’t have an expiry date. And there have been one or two cases where the person has defied doctor’s prognosis and is still alive 18 months later.

If a person has a sudden traumatic brain injury and can’t communicate – ie they’re in a coma – but they have previously mentioned to their family that they support VAD, how can we provide for this?

The answer is that they cannot be eligible. To be eligible you have to have decision-making capacity.

Can a mental health condition be a qualifier for VAD?

The answer is no, because this is intended to be an option for end-of-life care. Unless you’ve got some other conditions that is likely to cause your death in the near future, it would follow that mental illness alone would not be appropriate.

What about New Zealand citizens living in Australia since 1998?

Unfortunately, we’ve had a few New Zealanders who have run afoul of the fact that they can’t establish that they’ve got permanent residence. It is something which I think can be resolved, however.

The intention of requiring that you must live in Victoria for 12 months and you must be an Australian resident was to stop medical tourism. But now that every state in Australia and New Zealand itself has a similar Act in place, it might be logical for the legislation to provide for access so long as you came from somewhere where you would have been eligible under their legislation.

But at the moment, regrettably, there are cases where New Zealanders have had difficulty qualifying.

Are there consequences for obstructing a person wishing to die with dignity?

No. There are consequences – criminal offenses – for those who encourage or coerce people into taking the medication, but there is no offense for obstructing somebody.

People with progressive dementia are unable to access VAD, despite the loss of their cognitive capacity causing great distress. Is there any prospect that this cohort may being included in VAD access in the future?

Dementia is a real problem, so long as we keep autonomy at the centre. Autonomy means that you’ve got a capacity to make a decision about your own care. Once your dementia is advanced enough that you’re no longer able to make the decision about this, you’re not eligible. But you cannot provide for it in an advanced care plan. So you can’t be eligible.

The only place that VAD is available for people with dementia is in the Netherlands. And it is causing some issues there. I can’t see any change in this happening [here] in the future. I think it’s a bridge too far.

How can we encourage Catholic hospitals to allow VAD?

I respect the right to exercise one’s conscientious objection. I don’t have an answer to how you could change people’s views.