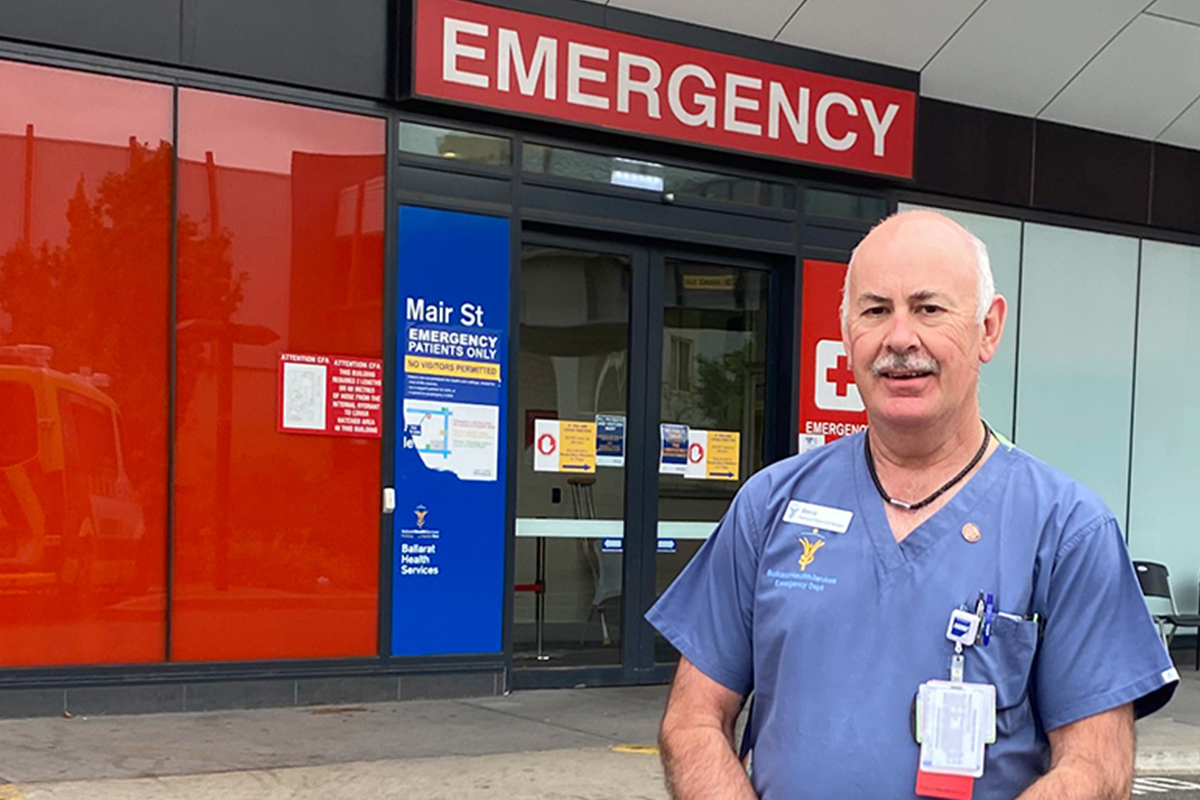 Stephen McKenzie is a true family man. So much so that he followed his wife (and sister and at least a couple of aunties) into nursing. Today, his daughters are nurses too.

Now an ANUM at Ballarat Base Hospital’s Emergency Department – as well as an executive member of ANMF (Vic Branch) council – Stephen began his career in a completely different field. ‘Nursing is my second career,’ he explains. ‘I started out as a fitter and turner back in 1979, and did a four-year apprenticeship at a local engineering place.’

But with engineering in Ballarat petering out towards the end of the 80s, Stephen had to find new opportunities. At the time, his wife was an enrolled nurse and his sister a registered nurse, and with a young family and a nurturing nature, he decided nursing offered him an ideal ongoing option.

Stephen started his new – and lasting – career in 1988, as an enrolled nurse. After completing his training, he worked for a few years at the Queen Elizabeth Centre and St. John of God hospital Ballarat, primarily in orthopaedics, before going back to university and completing his Bachelor of Nursing. ‘It was five days a week at university and then I worked three days a week at St John’s,’ he says. ‘Uni finished on Friday, then I went straight to work, and worked Friday, Saturday, Sunday. For three years.’ On top of that, he was also a father and husband seven days a week.

He graduated as an RN in 1994. ‘Back then, graduate years weren’t as big as they are now,’ he says. ‘And I was already working as an enrolled nurse. One day I wore a blue shirt and next day I wore a white shirt.’

In 1996 Stephen moved over to Ballarat Health Services, and after doing a postgraduate certificate in critical care he spent several years working in intensive care. During this time, he recalls, a new emergency department was being built at Ballarat Hospital. In his past life as a fitter and turner, Stephen had also been a volunteer with the State Emergency Service (SES) – he was on the ground at Mount Macedon supporting the Country Fire Authority following the Ash Wednesday bushfires, and he’d spent time in the Grampians searching for lost walkers, among other assignments. He rightly assumed the skills and experience he gained during his time with the SES combined with his professional skills and interest in critical care would suit a life in emergency, so he jumped at the opportunity to work in the new ED. He’s been there ever since. 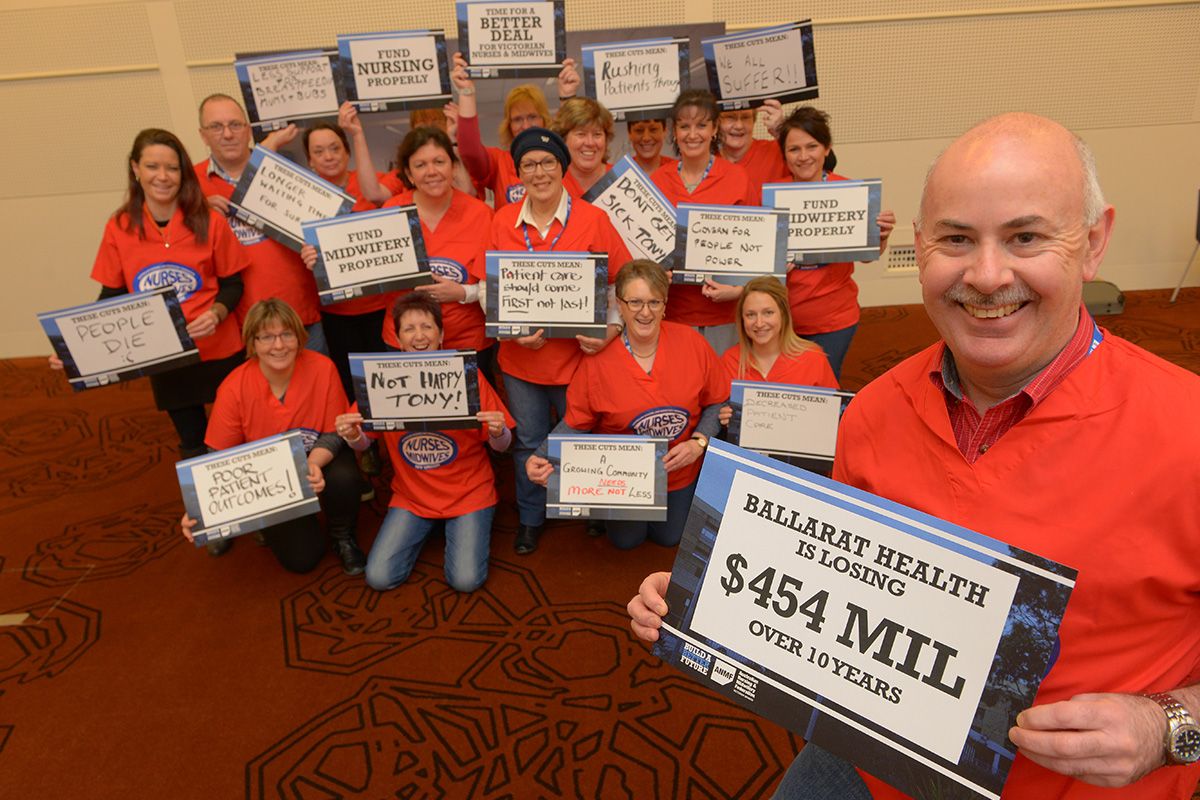 A life in emergency

Stephen’s time with the SES had dissipated a bit once he started nursing so he found new ways to expand his emergency role. He did a course in Major Incident Medical Management and Support (MIMMS), and through that found his way to the Victorian Medical Assistance Team (VMAT). That role eventually led to an opportunity to be part of the Australian Medical Assistance Teams, or AUSMAT.

Under the auspices of the National Critical Care and Trauma Response Centre, a key part of the Federal Government’s disaster and emergency medical response capability, AUSMAT has seen Stephen deployed to Timor-Leste, Samoa, the Howard Springs quarantine centre and Fiji.

‘These opportunities don’t always come easy; they leave scars. Every time we look after someone we give a bit of ourselves.’

In Timor, he was part of the medical support team for riders in the Tour de Timor, ‘which is the toughest mountain bike race in the world’. He was deployed to Samoa during a measles epidemic. ‘That was a tough gig,’ he says, with many incredibly sick, unvaccinated children coming in.

His time in Fiji, meanwhile, was part of the pandemic response. ‘We flew over in a C17 Globemaster, which is the biggest plane in the Royal Australian Air Force. Big enough that we took three ambulances with us in the plane! I think we also took something like 650,000 N95 masks with us.’

Stephen isn’t the first intrepid nurse in his family. One of his aunties was a nurse and midwife who worked with the Australian Inland Mission in places such as Birdsville in outback Queensland, Oodnadatta in remote South Australia, and Western Australia’s Warburton Ranges. At one stage, he says, she travelled on a scholarship to America to study comparative differences between the Australian and American health systems’ work with Indigenous peoples.

Today, Stephen and his wife work in the same hospital. ‘Upstairs, downstairs,’ he says, laughing. Their youngest daughter, Claire, is also a nurse in Ballarat – she followed Stephen into emergency nursing – while their eldest daughter, Erin, is an Endorsed EN in Alice Springs where she works as a Care Co-ordinator for local First Nation residents. Erin is also a Branch Councillor with ANMF NT.

He says they never expected the girls to follow in their footsteps, Claire especially. ‘She’s super sporty and was always going to do PE sport and health. But she came home the day that you had to put in your university choices and said “I’ve chosen nursing, in Ballarat.” And what else? we asked. “Just that. Just the one choice.” So that really floored us a bit.’

They are, of course, very proud.

Asked what advice he had for his daughters prior to joining the industry, as well as for all new nurses, Stephen says ‘our job is to look after patients, which is not just about giving medications – it’s about caring; not just the physical care but the emotional care, that wholistic care.’

He also points out that nursing is a passion. And he’s been lucky that his passion has afforded him some incredible opportunities. ‘People don’t often get opportunities in life to do amazing things,’ he says. ‘I’ve had several. But these opportunities don’t always come easy; they leave scars. Every time we look after someone we give a bit of ourselves. We try to do our best for the most and use all of our skills, training and experience to provide optimal care for those patients who entrust their care to us.’ 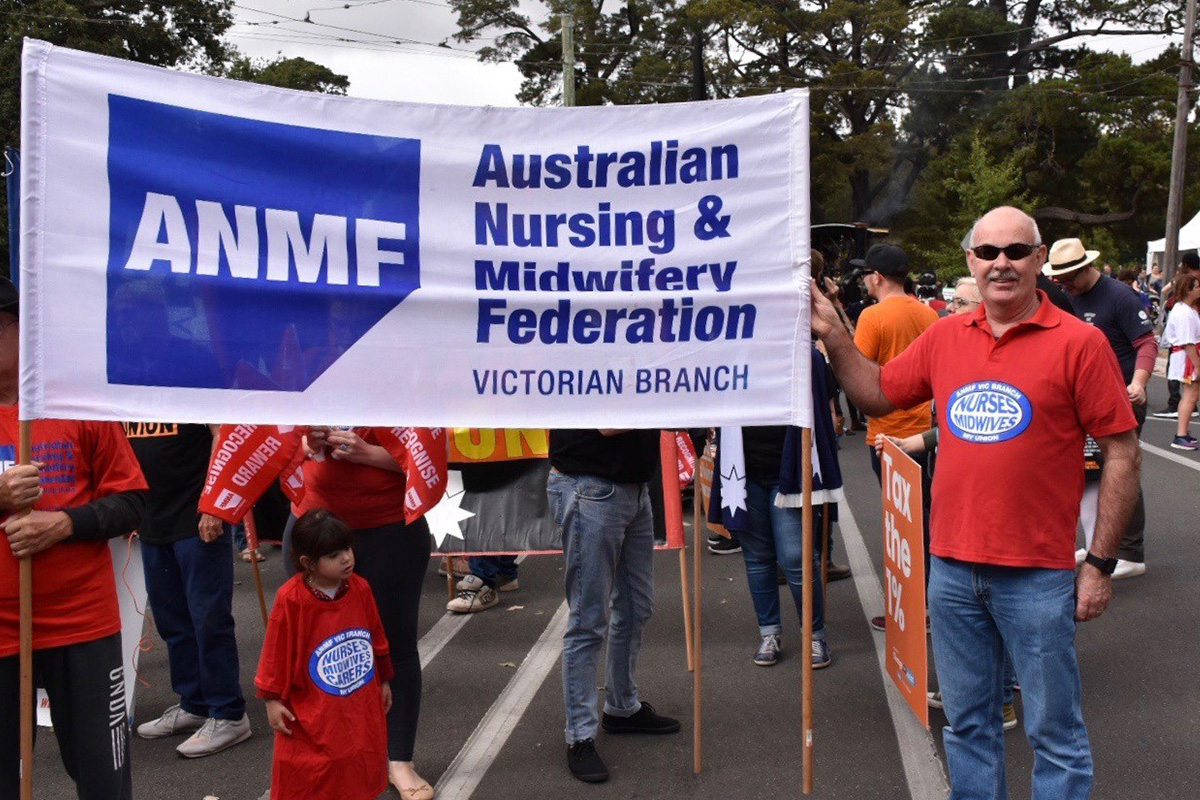 Stephen McKenzie at a Ballarat Labour Day march in 2019

Stephen McKenzie has been a union member his entire career; it’s a commitment he attributes to his mum: ‘I wasn’t born with a silver spoon; I don’t own my house because someone gave it to me. I’ve had to work my whole life. So I’ve always been a union member, and have always supported the cause.’

He was originally a member of the Australian Metal Workers Union, and he joined then ANF when he started working as a nurse. He’s been an ANMF Job Rep since 2004. In 2010, he participated in the Belinda Morieson program for Job Reps, and was elected to Branch Council. The following year, he joined the executive committee. ‘That’s afforded me lots of opportunities to advocate for members,’ he says, adding that Council work is ‘about foresight: where is nursing going, into the future?’ 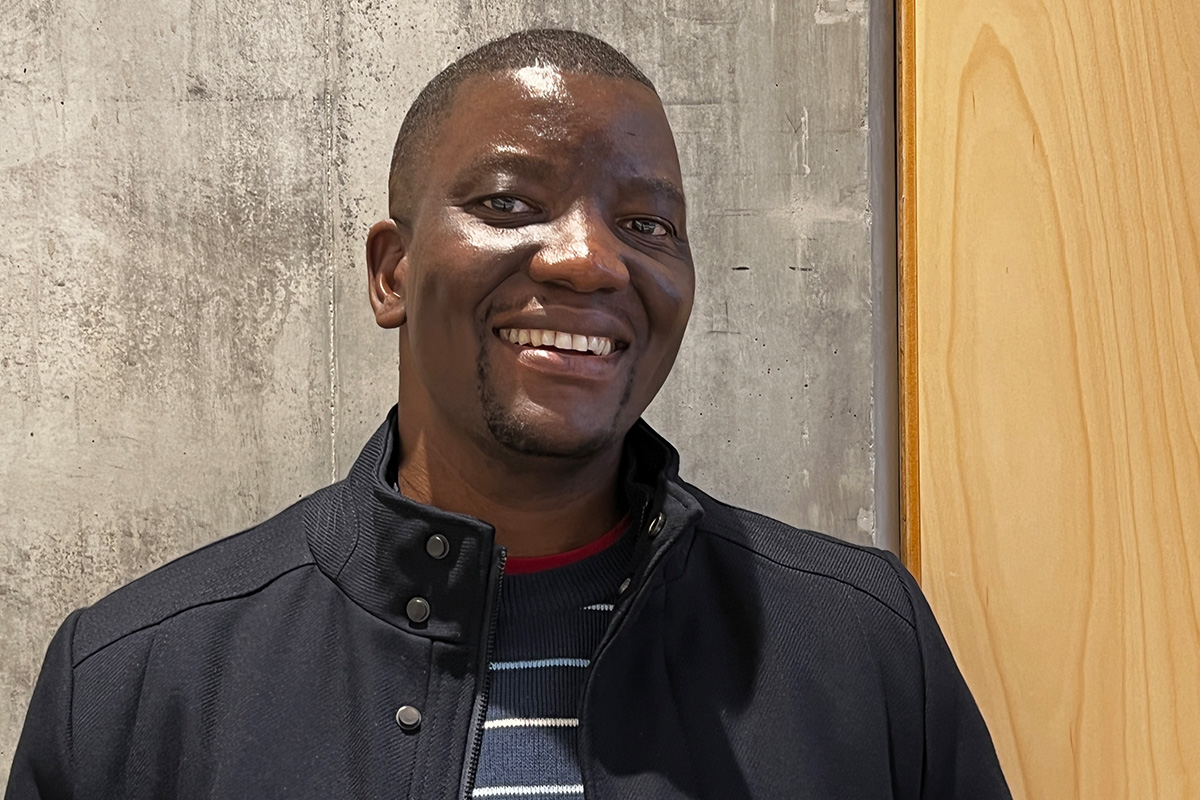 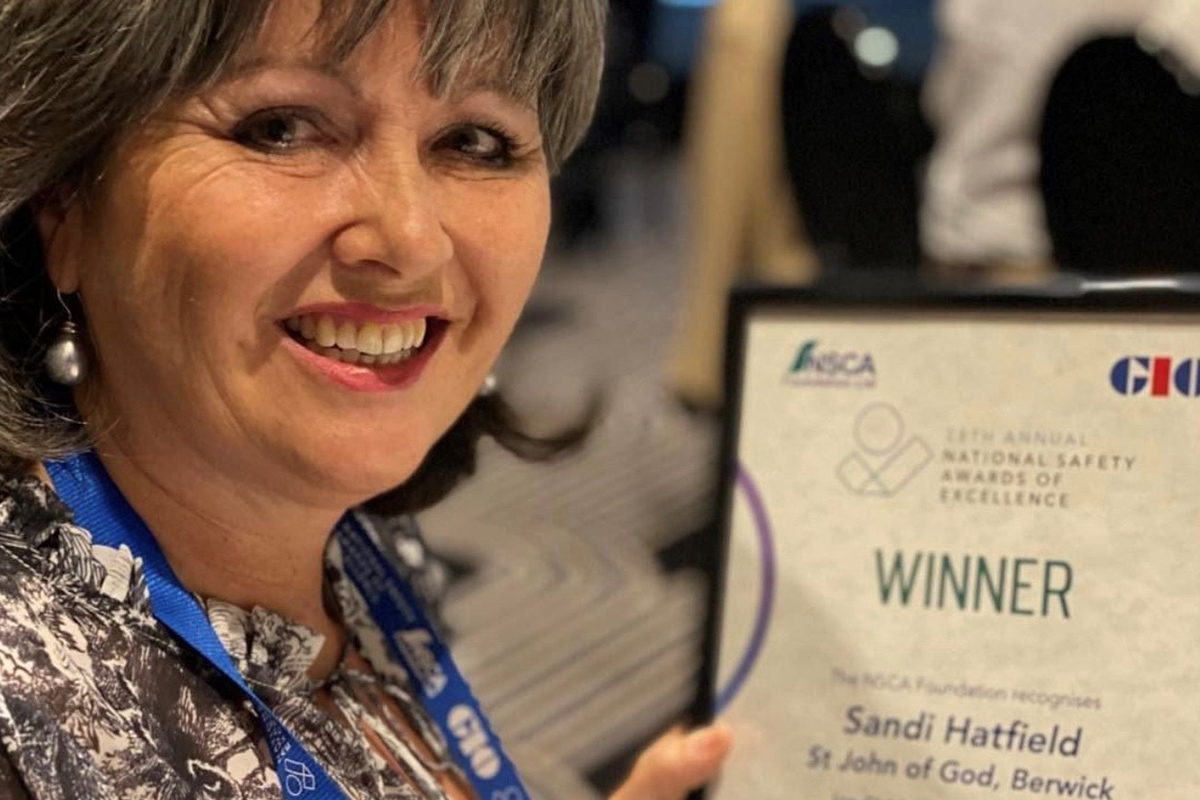 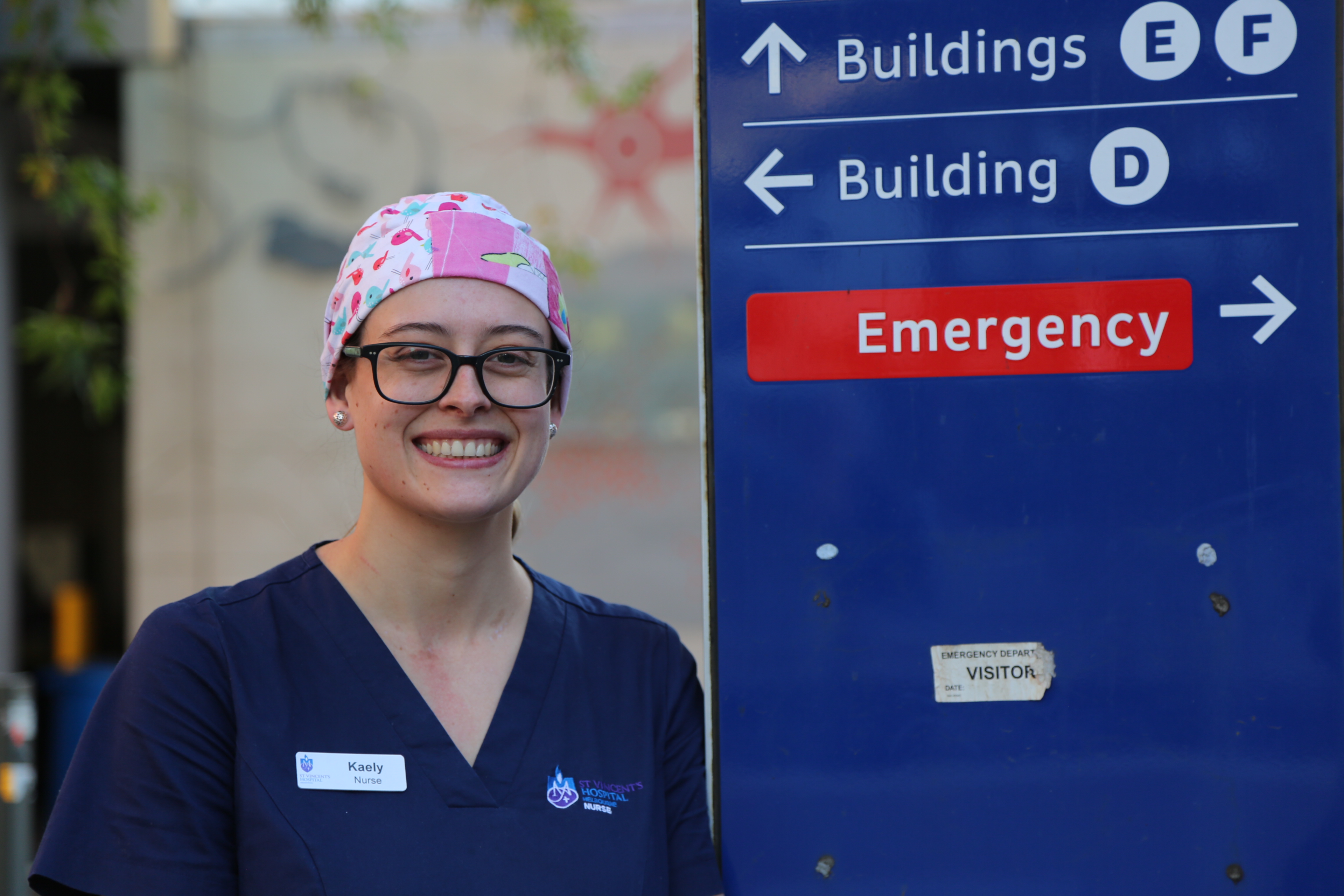 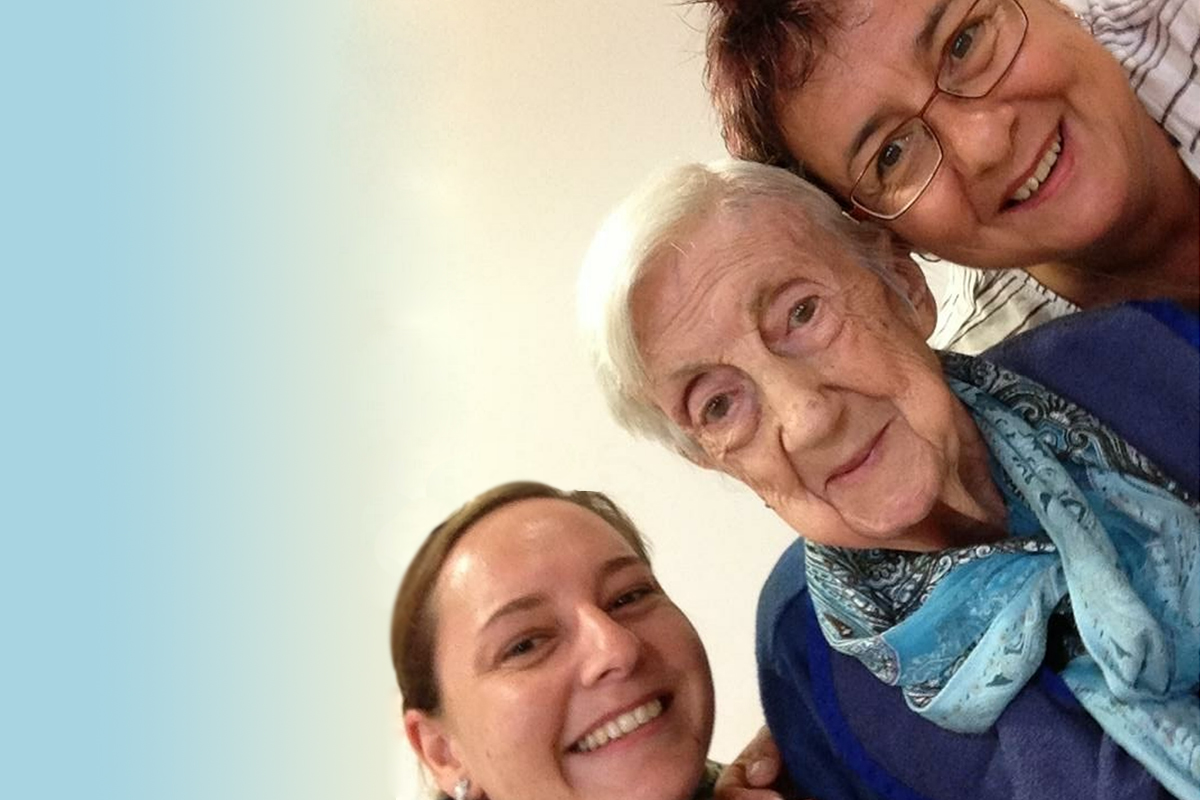