Greta Thunberg gets it.

The 16-year-old Swedish climate activist, who has inspired a world-wide movement of student climate strikers, says her actions are underpinned by a belief – backed by science – that we are experiencing a global emergency.

As she said in February: ‘If everyone listened to the scientists and the facts that I constantly refer to, then no one would have to listen to me or any of the other hundreds of thousands of school children on strike for the climate across the world.’

Joëlle Gergis is one of those scientists Greta Thunberg is constantly referring to. She’s a leading climate scientist and an academic at Australian National University.

Dr Gergis wrote Sunburnt Country: The History and Future of Climate Change in Australia and is one of Australia’s lead authors writing the sixth report of the United Nation’s Intergovernmental Panel on Climate Change (IPCC).  She is also a scientific advisor to Australia’s Climate Council.

Dr Gergis wrote in August’s The Monthly that she now has the same gut-wrenching feeling about climate change she felt when a surgeon sat her down with a CT scan showing the damage to her father’s brain after he’d had a massive haemorrhage.

‘The brutality of the evidence was clear – the full weight of it sent my stomach into freefall,’ Dr Gergis wrote. ‘The results coming out of the climate science community at the moment are, even for experts, similarly alarming.’

Without major mitigation efforts, Dr Gergis writes, we are on track to double carbon dioxide concentrations from pre-industrial levels by around 2060.

The IPCC’s 2013 assessment report predicted that a doubling of CO2 would increase the global temperature by 1.5°C to 4.5°C degrees above pre-industrial levels. But using updated climate modelling, IPCC scientists say that these CO2 levels may in fact produce between 2.8 and 5.8°C of warming.  At least eight of the latest models produced by leading research centres are erring to 5°C or more.

This data, Dr Gergis wrote, resulted in ‘a flood of panicked emails’ from her IPCC climate scientist colleagues.

It is still possible to turn things around. But just as there is a huge difference between going to the doctor for a check-up and calling an ambulance, many are not understanding the urgency.

The IPCC’s Special Report on Global Warming at 1.5°C, released in October 2018, says that when it comes to the impacts of global warming on millions of people, half a degree matters. There is a significant difference between the Paris Agreement’s base target of 1.5°C warming this century and the upper limit of 2°C for key impacts such as drought, flooding, sea level and heatwaves – all of which affect health and food security.

Nurses working in emergency services would understand this urgency when you consider the growing incidence of climate-related events like thunderstorm asthma and bushfires which place a huge burden on our emergency departments and hospitals.

These events are becoming more frequent and disproportionately affect our most vulnerable like the immune-compromised, the elderly and young children. The link between a warming climate and poorer health outcomes cannot be ignored.

We can keep global warming to 1.5°C this century, the IPCC report said, but urgent and unprecedented global change is needed, both to reduce CO2 emissions and mitigate existing warming. Global CO2 emissions would need to fall by 45 per cent from 2010 levels by 2030, reaching net zero around 2050.

That’s why School Strike 4 Climate’s list of demands for Australia include no new coal, oil and gas projects including the Adani mine, and 100 per cent renewable energy generation and exports by 2030.

Young people are hearing the scientists’ message – and the future is theirs.

What you can do:

School Strike 4 Climate has updated its list of national demands to include a just transition and job creation for fossil fuel workers and communities. 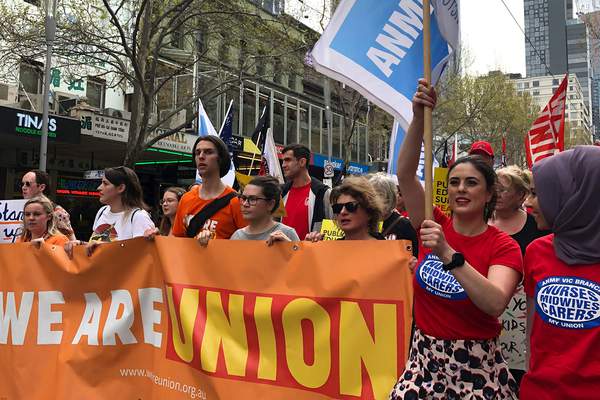 Climate change and health impacts – what do we know?