A 'Respect Our Work' statewide meeting at Festival Hall

Ten years ago, in October 2011, ANMF (Vic Branch) members signalled the beginning of the longest industrial and grassroots campaign in Victorian nursing and midwifery history.

On 7 October 2011, members of the Victorian Branch of ANMF – then ANF – were asked to vote for the right to take protected industrial action as part of the public sector enterprise agreement campaign.

It was the largest protected action ballot conducted in Australia. On 4 November 2011, the outcome of the secret ballot was announced: of more than 30,000 public sector members who received a ballot paper, over 98 per cent of nurses and midwives approved the proposed industrial action, which included bed closures and stop work actions.

The Branch was negotiating with the Liberal Baillieu Government and the employers’ representative, the Victorian Hospitals Industrial Association (VHIA), which outlined their position on 20 October: at least 18 reductions in conditions, employer rights to go below nurse/midwife to patient ratios and the capacity to substitute nurses and midwives by employing nursing assistants as part of ratios.

On 6 November 2011, the Sunday Age revealed the Baillieu Government’s secret plan to force ANMF into arbitration,
thereby gaining ‘flexibility’ in nurse/midwife to patient ratios, being able to substitute nurses for assistants and other means to save up to $104 million per year.

(A previous case involving the education union had created a precedent for Fair Work Australia being unable to set staffing numbers; the Baillieu Government knew that under arbitration, mandated ratios would fall away.)

On 8 November 2011, the ANMF served notice on public health services, apart from the Peter MacCallum Cancer Centre
and the Royal Children’s Hospital, of members’ intention to take industrial action. Low-level industrial action began at all participating workplaces and on 12 November, the action was scaled up to bed closures.

‘Public sector nurses and midwives who have entered their professions within the last decade should know what courageous action ANMF members took during the 2011–12 EBA campaign to keep the nurse and midwife to patient ratios that have since been protected in legislation by the Andrews Government,’ ANMF (Vic Branch) Secretary Lisa Fitzpatrick said.

‘They were willing to close beds, they were willing to stop work, they marched, they rallied, they doorknocked… They were even willing to resign – because they knew that once ratios were gone, we would be back to the dark days of not being able to give patients the care they deserve, and nurses and midwives leaving the professions, demoralised and exhausted.’

At the end of the 1990s when hospitals could staff as they wished, there were more than 1300 vacant permanent nursing and midwifery positions and 400 hospital beds were closed every day.

Ironically, in mid-November 2011 Fair Work Australia heard an application from the government and VHIA for termination of ANMF members’ industrial action on the basis that it endangered public health and safety. The Full Bench decision was that industrial action should be suspended for 90 days from 17 November.

If the decision had been to terminate, rather than suspend, the industrial action, this would have forced the matter to arbitration and Victorian nurses and midwives would have lost their hard-won nurse/midwife to patient ratios.

On 29 November 2011, ANMF (Vic Branch) was back at Fair Work Australia, this time seeking to settle the ‘ratio flexibility’ issue with the government and VHIA. On 1 December, the government and VHIA responded with the same proposal they had presented in October – rights of management to determine compliance with ratios, unlimited short shifts and unlimited substitution of nurses for nurse assistants. Fair Work Australia suspended conciliation due to the impasse on the ratios issue. ANMF called on employers to make a settlement offer, to no avail. At a statewide meeting of nurse and midwife members the following day, members resolved to ramp up pressure on the government and employers by holding community rallies throughout Victoria.

ANMF sent to hospitals’ management its proposal for the application of ratios and how the government and VHIA had
responded. Two days later, the first of more than 30 community rallies throughout the state took place at the Royal Melbourne Hospital/Royal Women’s Hospital.

During the campaign, 3452 members trusted ANMF with their signed resignation authorities.

The government’s push to abolish nurse/midwife ratios, replace nurses with health assistants and replace eight-hour shifts with split shifts and four-hour shifts was a threat to their patients’ safety and to their own wellbeing, and was not to be taken lying down.

Members then marched to then-Health Minister David Davis’s office to deliver a petition with over 40,000 signatures. 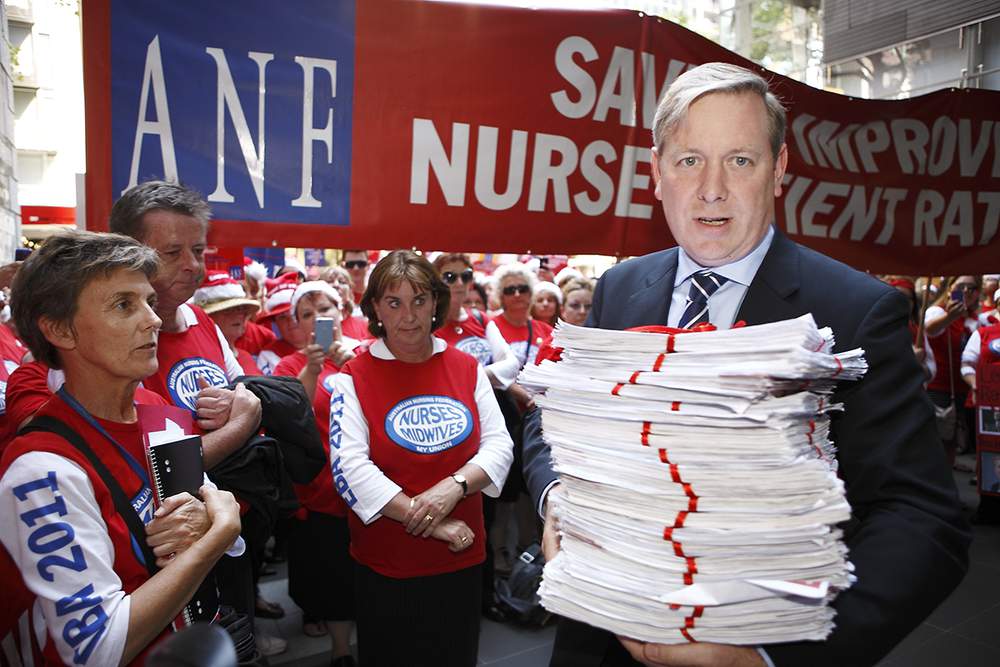 Then Victorian health minister David Davis in 2011 accepting nurses’ and midwives’ ribbon-wrapped petition – but not the message.

In January 2012, ANMF members and executive attended the Australian Open, where the campaign of Victorian nurses and midwives attracted some high-profile support. Tennis player Pat Cash wore the ANMF’s ‘Respect Our Work’ campaign t-shirt and singer Jimmy Barnes performed in the campaign bandanna during the closing celebrations. Singer Jimmy Barnes wore a campaign bandanna during a set. The ANMF ran television advertisements in early 2012 with nurses speaking, unscripted, about the impact that the
Baillieu Government’s plan to end ratios would have on them and their patients.

On 7 February 2012 ANMF’s first audit of public hospital beds found up to 1516 beds had been closed. Four days later, more than 150 nurses and midwives doorknocked residents in the marginal Liberal seat of Bentleigh to talk to them about how they would be impacted by the Baillieu Government’s plan to topple ratios and replace nurses and midwives with health assistants. The ANMF members did not comply and organised themselves using social media, with further metro and regional hospitals joining the stoppages over the following days. Neither did they comply with the Federal Court’s 28 February order to stop the industrial action.

On 7 March ANMF members in general public sector hospitals ceased industrial action, as the ANMF, the Baillieu Government and the VHIA issued a joint statement. The parties had reached agreement to resolve outstanding issues by 16 March, with assistance from Fair Work Australia, and ANMF members would cease industrial action immediately.

On 16 March a statewide members meeting endorsed the outcome of those negotiations, ending the nine-month hard-fought campaign.

‘Credit is absolutely due to our members, who were unstoppable. I would also like to acknowledge our legal team headed by Philip Gardner, who as senior counsel at Gordon Legal continues to represent ANMF members,’ Ms Fitzpatrick said. ‘Their tactical advice and representation were exemplary.’

Between October 2011 and March 2012 members undertook two periods of significant industrial action including bed closures, elective surgery cancellations and four-hour rolling stoppages twice a day. Their pay docked and they were threatened with fines after taking unprotected industrial action.

To all the public sector ANMF members who took action for their professions and their patients in the 2011–12 EBA campaign, we salute you. Arriving at a ‘Respect Our Work’ statewide members meeting.

This article was first published in the October 2021 edition of The Handover. 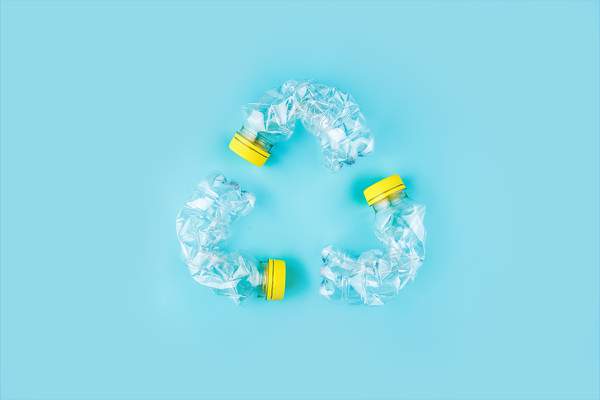 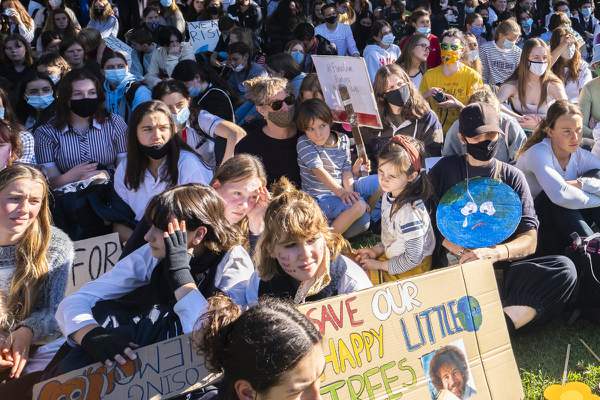 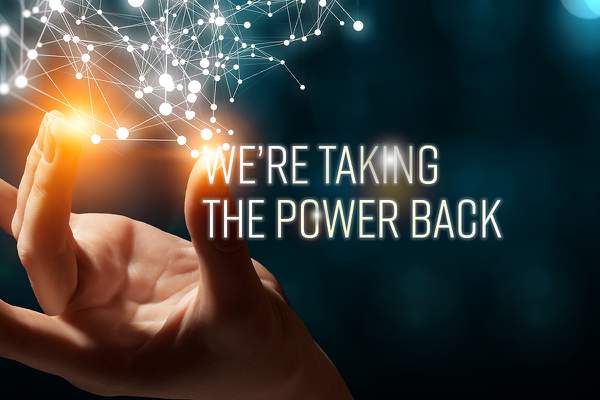 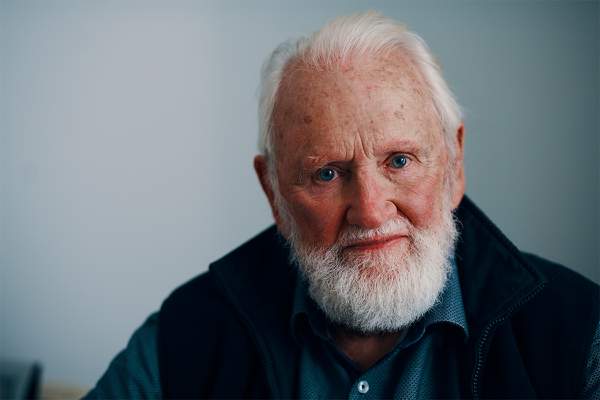