When registered undergraduate students of midwifery (RUSOMs) joined the midwifery staff at the Joan Kirner Women’s and Children’s Hospital in November 2020 it didn’t take long for them to become highly valued members of the team.

Judith Robinson, who is studying midwifery at the Australian Catholic University, was one of the 16 midwifery students selected to become the first RUSOMs in Victoria as part of a pilot program at Western Health.

The registered undergraduate students of nursing (RUSON) program was piloted in 2016 at Monash Health, Alfred Health, Ballarat Health and Eastern Health, and RUSONs are now entrenched in the nursing workforce. With ANMF (Vic Branch)’s advocacy, the RUSOM model has now been introduced into midwifery and soon in mental health.

When the pilot program group of RUSOMs started at Joan Kirner Women’s and Children’s Hospital, the first week or two involved the midwifery students learning about the workplace, and staff becoming familiar with the scope of the RUSOM role.

‘We were all obviously really excited,’ Judith said. ‘Now we’re just a part of the team and a lot of the midwives say we don’t know what we did when we didn’t have RUSOMs.’ The scope of practice enables RUSOMs to undertake select duties under the direction of a midwife.

‘We’re kind of an extension of the family unit, helping mum change baby, we do a lot of baby baths, helping with breast-feeding support, we do a lot of expressing, taking milk down to the nursery, stocking equipment, answering buzzers, getting day-one caesers out of bed, helping them with their showers, helping with mother-crafting skills like helping mums wrap their babies and look out for cues of (babies) being hungry, settling them…’

Judith has found it invaluable to put her learning into practice. “I wish this system was in more hospitals,’ she said.

‘(While) we’re not doing observations or medication we’re with the midwives and hear them talking to the doctor, we look on our handover sheets and (can) ask, “What does this mean? What are you doing for them?”. We’ve got access to the policy and procedures. We’re just exposed to it every day…It’s been amazing.’

Judith decided to become a midwife because she has always been fascinated by pregnancy and birth. When it came time for her to choose a career, her mother, who is a nurse, suggested midwifery.

Although both her mother and boyfriend are nurses, Judith opted to study the Bachelor of Midwifery degree, rather than the dual nursing/midwifery option.

Judith is brimming with enthusiasm for the role of the midwife in advocating for women and supporting them at a profound time of their lives.

‘It’s about so much more than looking after babies and seeing births,’ she said.

‘Women can come out of their birth feeling the most empowered they’ve ever felt in themselves and our role as midwives is to promote that, to ensure that through all aspects of pregnancy and birth, and the post-natal period, they’re informed and empowered by the care they receive.’

To graduate, Judith has to accrue the practice hours that will demonstrate required skills such as vaginal examinations, witnessing surgical or instrumental births and being the primary accoucheur – the midwife at the baby’s birth.

The RUSOM model has also been introduced at the Royal Women’s Hospital, with consultation on the model underway at Peninsula Health, Bendigo Health and the Mercy Hospital for Women.

This article was originally published in The Handover, July 2021. 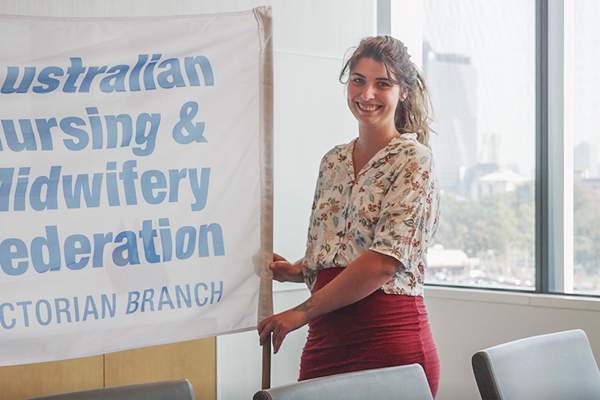