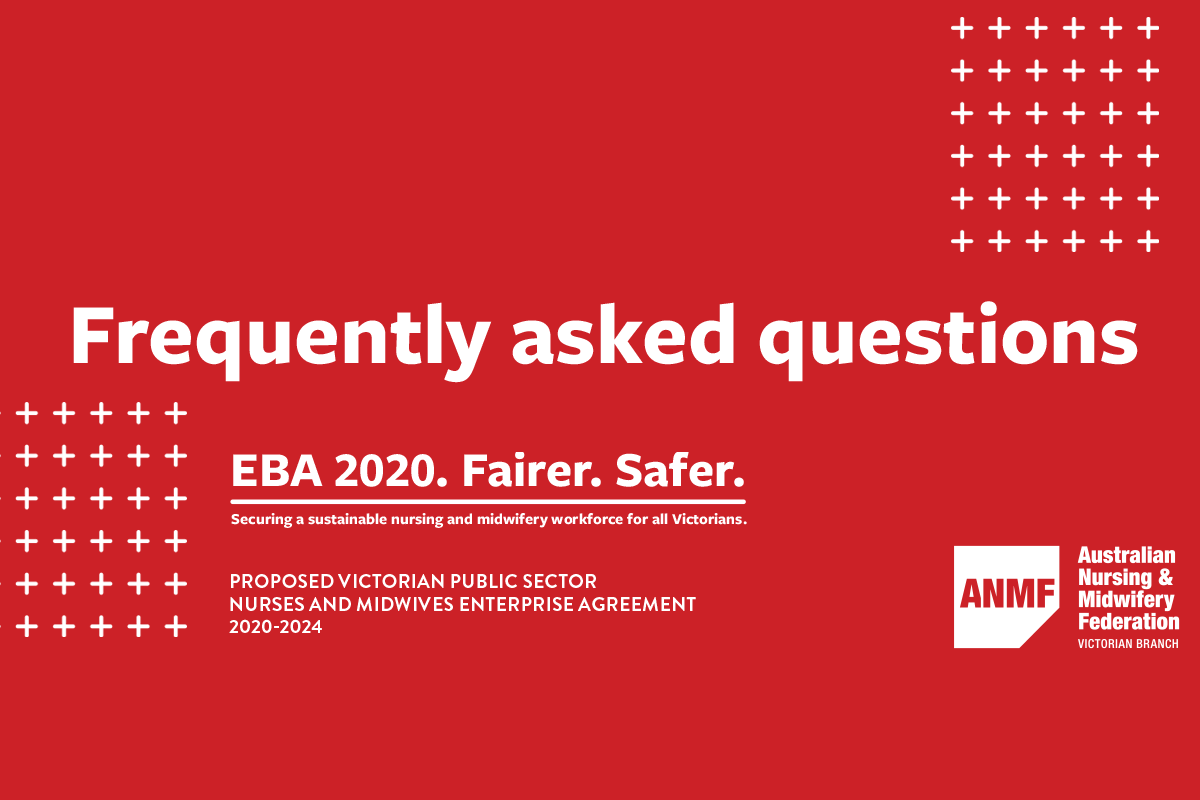 Following on from the statewide virtual meeting of 16 April 2020, there were a number of queries that ANMF indicated we would respond to after the meeting. This information is to be read in conjunction with the more detailed information contained the 16 April EBA Update (anmfvic.asn.au/newsflash16april).

A small number of the queries related to difficulty accessing the virtual meeting. ANMF understands that some health service computer systems blocked the link though the health service’s firewall. The current pandemic meant ANMF and our members had to approach this meeting in a new and untested environment. While employers were notified of the meeting, and were encouraged by their representatives to enable members to participate in paid time, it was not until we actually tried the online virtual meeting approach that these problems surfaced.

A number of questions related to clarification about existing entitlements, such as who has access to carers’ leave, failure to pass on wage increases and not being paid your qualification allowance. ANMF encourages members to make those type of inquiries to our Member Assistance service via anmfvic.asn.au/memberassistance

1. How do ANMF decide what claims to pursue?
Each year ANMF and hundreds of our Job Reps and Health and Safety Reps meet at the Annual Delegates Conference. Job Reps and HSRs bring motions, requested and supported by members at their workplace, to the conference for improvements to enterprise agreements, ratios and other issues. The motions are debated and put to a vote. If the motions are supported by the majority of delegates, they then inform the various EBA logs of claims that the ANMF takes to Branch Council for endorsement. We also seek changes arising from disputes or difficulties we have had with existing EBA terms and develop ideas internally to address what we believe will be of benefit to our broader membership.

The Annual Delegates Conference usually happens in June of each year. Due to the COVID-19 pandemic it is not possible to hold the conference this year.

If you want to become more involved, and you are not an ANMF Job Rep or HSR already, please visit anmfvic.asn.au/reps for information about how to become one.

From 1 July 2022 both full and part time enrolled and registered nurses and midwives will have access to the sixth week of annual leave if they work “ordinary hours” on a part of 10 weekends or more over the year. “Ordinary hours” does not include overtime or on-call, and is a term that generally means rostered hours.

Where less than 10 occasions are worked per year you will be credited with a pro rata entitlement.

If you are getting the sixth week of annual leave under the old ‘test’ you will continue to do so even if you do not meet the new test, unless at your initiative you change jobs.

3. Meal breaks
It is currently the case that if you occasionally miss out on your meal break, or you are not allowed to leave the ward or unit for your meal break, you are entitled to be paid for that meal break at 150%, so a 30 minute unpaid break would become a 45 minute payment for missing out on your break.

It is ANMF’s preference to ensure that members wherever possible are free to leave the ward for their meal breaks. In support of that there will be two new provisions:

4. Long service leave
Currently all enrolled nurses (Including casuals), and full and part time registered nurses and midwives have an LSL entitlement of 26 weeks after 15 years contained in the EBA, accessible pro-rata from 10 years. That means you accrue LSL at 1.7 weeks per year of service. Unbroken service between public sector employers in Victoria counts as service with your current employer.

Since November 2019, up to 24 months of parental leave counts as service under the Victorian LSL Act, the EBA clause will be amended to provide this same entitlement to full and part nurses and midwives reliant on the EBA.

Casual registered nurses and midwives have not historically had an EBA entitlement to LSL, but they do have an entitlement under the Victorian LSL Act, that entitlement is 13 weeks after 15 years, accessible pro-rata from 7 years. That means you accrue LSL at
.866 weeks per year of service.

If you move from permanent to casual your entitlement then becomes the lesser casual entitlement, although we are intending to include a provision that allows you to remain on the casual bank with your old employer and transfer your service to your new full or part time employer.

The aim of the new EBA clause is to ensure that your entitlements are not contained in two different places, the EBA and LSL Act, and instead have all the relevant terms within the one clause.

As to whether LSL can be taken one day at a time, yes if it is taken as part of a transition to retirement arrangement. Otherwise LSL will be taken in one period or more periods of at least one week.

5. Cumulative recall (without return to work)
This is a complex clause that applies from 1 July 2021 and is perhaps best explained by an example.

If I was rostered to start work at 7:00am for a rostered shift, but was on call overnight to assist patients or staff, and I meet a certain threshold of recall I will be entitled to a 10 hour break before recommencing rostered work, without loss of pay. The key is that my last recall must have occurred within 4 hours of my rostered shift time, in this example since 3:00am. If your last recall occurred at or after 3:00am, and the total recall in the preceding 8 hours (so between 11:00pm and 7:00am):

If you employer does not, or cannot, give you the 10 hour break, you must be paid at the rate of double time until released from duty for 10 consecutive hours, without loss of pay for rostered ordinary hours occurring during such absence

6. After hours coordinators
Each campus of each health service will be categorised as either A, B, C or D. If the campus Director of Nursing/Midwifery is classified as NM8A, then the After Hours Coordinators will be classified at NM5A.

The campus definitions are broadly:

7. Campus
The new definition of campus will be:

8. Rosters
Some members expressed concern that their employer is not currently issuing a 28 day roster 14 days before it comes into operation. This is a requirement of the current EBA, and a failure to comply with this is a breach of the current EBA.

9. Plus “in-charge” and ratios
Neither the current EBA, nor the new one, contain ratios – these are now contained in the Safe Patient Care Act. During the presentation, ANMF explained briefly a number of improvements to ratios that have occurred, are effective from 1 March 2020, or are scheduled occur between now and 2024.

Most existing ratios require a ‘plus in-charge’ on AM and PM shifts. The Act does not describe the role of the in-charge nurse or midwife, rather that the relevant ratio (e.g. 1 to 4) applies to the beds (e.g. 28 beds) and therefore 7 nurses/midwives are required – plus the ‘in-charge’ position. Then changes to the Act are extending that plus in-charge requirement to night shift in a number of areas, and also into particular ‘sub-wards’ within wards, such as short stay units in Level 1 emergency departments, and maternity units with a special care nursery comprising 8 or more cots.

While it doesn’t mean that the “plus in-charge” has no patient load, it does mean that the NUM/MUM or ANUM/AMUM is not counted in meeting the relevant ratio.

Improvements to ratios do not take place as part of bargaining, but is a separate process of engagement between the ANMF and the State Government.

10. Mandatory education
Casual employees do not have an entailment to professional development leave. The new mandatory education provisions will apply to all nurses and midwives, including casuals, and require any education that is mandated by the employer (as distinct from, for example, mandated by the Australian Health Practitioner Regulation Agency or the Nursing and Midwifery Board of Australia) to occur within paid time. This would extend to employer mandated education delivered by a third party.

11. Parental leave
Paid parental leave (both primary and secondary) is to be taken contemporaneously with the birth or placement of the child.

12. Relationship with the mental health EBA
There are two enterprise agreements that apply to public sector nurses (not midwives) one being the Nurses and Midwives (Victorian Public Sector) (Single Interest Employers) Enterprise Agreement 2016-2020 – that these improvements relate to, and another – the Victorian Public Mental Health Services Enterprise Agreement 2016-2020, that applies to all staff employed in certain public mental health services. The latter agreement is due for renegotiations, and usually we achieve the same outcomes for nurses employed under that EBA.

It has been confusing in the past for both for employers and members to be certain of which EBA applies.

13. What rate of pay will apply to an enrolled nurse who commences as a registered nurse?
The current EBA (as will the new one) states that an enrolled nurse who completes an undergraduate course which leads to registration and is subsequently registered as a registered nurse will commence at the Grade 2 increment immediately above the rate of pay (including senior allowance and/or qualification allowance (where applicable) applicable to that employee.

14. Why doesn’t the 8:8:10 roster pattern apply at my workplace?
The 2016-2020 EBA names numerous campuses that must have an 8:8:10 roster pattern for both full and part time employees. Each of these campuses was added to the EBA during previous bargaining rounds. They were included because they were named in Job Rep resolutions moved and passed at our Annual Delegates Conference, prior to 2017, on behalf of members in their workplace.

The new EBA adds further workplaces to this list:

Our 2020 claim was for all workplaces to make the 8:8:10 roster the default roster for full and part time employees. In negotiations it was apparent that we would not succeed in achieving this across the board, and instead we focussed on those that were both named in Annual Delegates Conference resolutions in 2017 or 2019 and were still working with an 8:8:8 roster pattern.

15. Where to from here?
Over coming weeks, the ANMF, the Victorian Hospitals’ Industrial Association and the Department of Health and Human Services will be undertaking the drafting work to incorporate all the improvements into a new enterprise agreement.

Once this is complete, the revised proposed agreement will be circulated to all employees who will be covered by it, with information explaining the changes. There is one complexity in this that we cannot easily control, and that is, because the agreement applies to more than one employer bargaining together, approval must be given by the Federal Workplace Relations Minister for a ‘single-interest’ agreement. Then that ‘single interest application’ must be approved by the Fair Work Commission. This process is awaiting finalisation.

Once those steps are complete, the proposed EBA will then go to a vote of all public sector nursing and midwifery employees, and if a majority of those who vote support the new EBA, an application will be made to the Fair Work Commission for its approval. Once approved, the EBA legally operates seven days later.

Terms that apply from a date prior to the Fair Work Commission approval steps will be backdated to the relevant date.

EBA 2020. Fairer. Safer campaign page – to find a PDF version of these FAQs for your workplace noticeboard

Update your details
So you get the information that’s relevant to you.
anmfvic.asn.au/memberportal 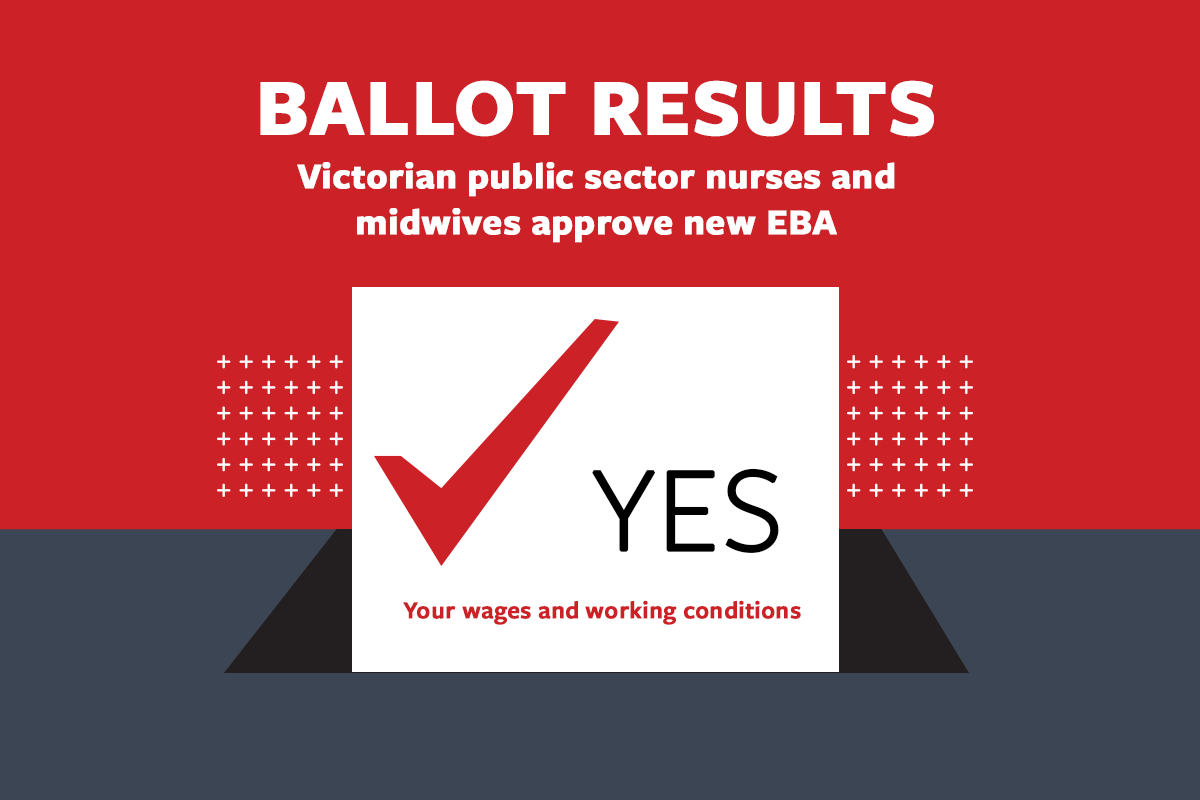 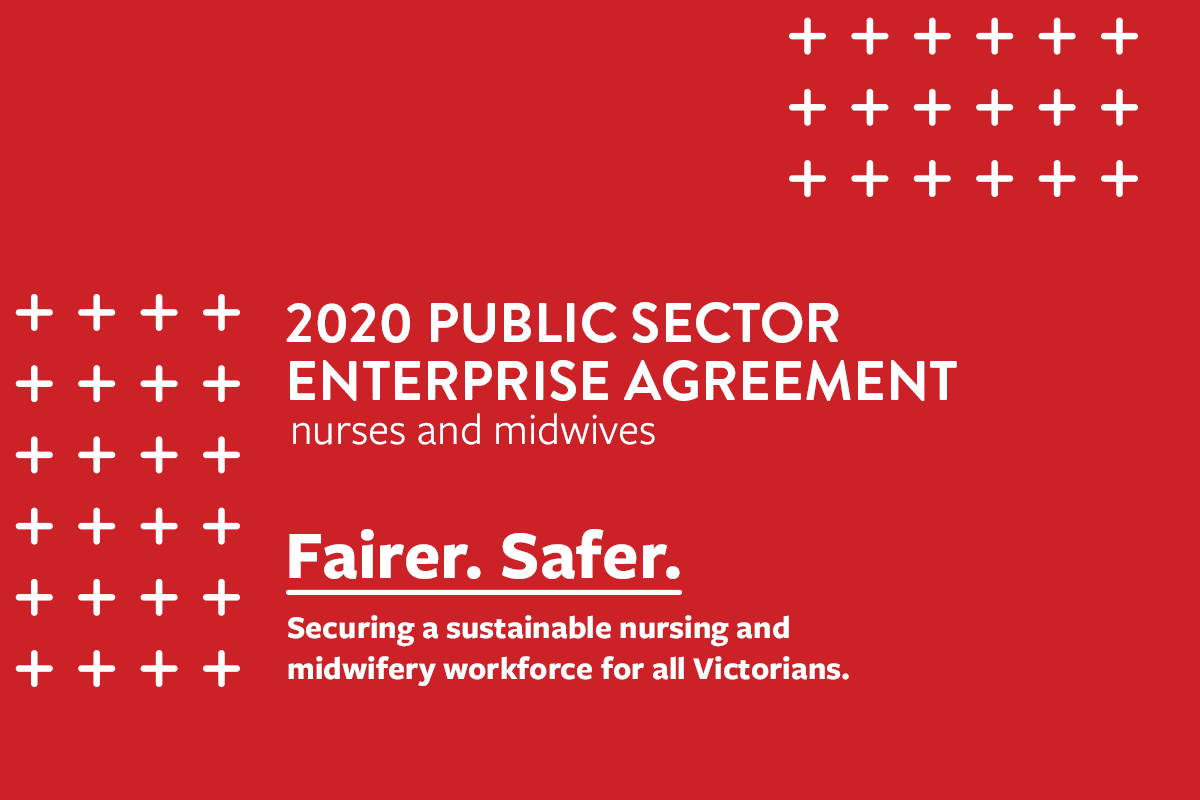 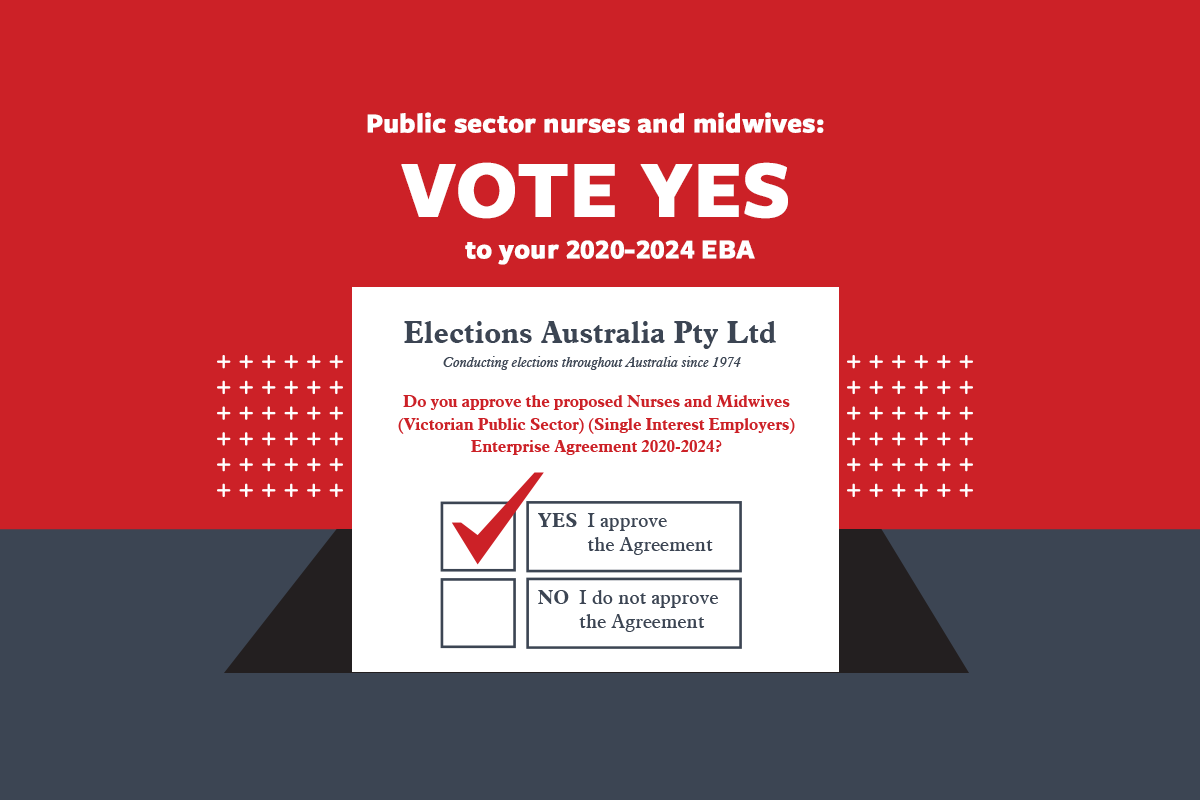