Social media – your ‘private’ views can get you into trouble

Nurses, midwives and personal care workers may believe that when they knock off work they’re free to share their opinions and frustrations about their employer, colleagues and patients on social media.

Even at work, you might assume that employers don’t have the right to film you or scrutinise private emails you send through your workplace’s internet system.

When it comes to communicating online about anything related to your work, for nurses, midwives and personal care workers, it’s best to assume that nothing is private.

Nurses and midwives are obliged to follow the Nursing and Midwifery Board of Australia (NMBA) codes of conduct which set out clear guidelines for protecting the confidentiality and privacy of people with whom they work – and not only patients. The code states that ‘People have a right to expect that nurses will hold information about them in confidence, unless the release of information is needed by law, legally justifiable under public interest considerations or is required to facilitate emergency care.’ It is the same for midwives under their code of conduct.

The NMBA has a specific social media policy covering registered health professionals, including nurses and midwives. Nurses, midwives and personal care workers should also be familiar with their employer’s social media policy, as well as the ANMF (Vic Branch) Social Media Policy.

The NMBA’s social media policy warns nurses and midwives against not discussing patients or posting pictures of procedures, case studies, patients or material which may enable patients to be identified without having obtained consent in appropriate situations.

‘Health professionals need to be aware that information circulated on social media may end up in the public domain, and remain there, irrespective of the intent at the time of posting,’ the NMBA warns.

Don’t assume that because you have set your social media account settings to the most restrictive privacy setting, or are using a false name, that you won’t get caught out complaining about your employer or a patient, or that your manager will never see those selfies taken at the beach when you took a day off ‘sick’.

ANMF members have been disciplined by employers after making negative comments about their employer on Facebook, thinking their ‘private’ post would be seen only by ‘friends’. On one occasion, a ‘friend’ took a screen shot of the comment and emailed it to the member’s manager, resulting in the member being threatened with dismissal.

Nurses and midwives have a professional responsibility to support evidence-based practice, so posting material such as anti-vaccination messages online could also trigger an AHPRA notification.

The NMBA code of conduct for nurses and midwives prohibits bullying and harassment related to their practice or workplace and notes that social media is sometimes used to bully or harass others. An ANMF member was stood down by their employer for harassing a colleague via text messages and social media. We have also represented a member who was notified to AHPRA after posting explicit photographs of women on social media without their consent. In another case, an ANMF member was cautioned by AHPRA after making anti-Islamic comments on social media.

The code of conduct states that nurses and midwives should understand that bullying and harassment is ‘not acceptable or tolerated’ and could have implications for their registration where it is affecting public safety.

The code says bullying and harassment takes many forms, including physical and verbal abuse, racism, discrimination, violence, aggression, humiliation, pressure in decision-making, exclusion and intimidation directed towards people or colleagues.

The code of conduct also requires nurses and midwives to respect diverse cultures, beliefs, gender identities, sexualities and experiences and to avoid bias, discrimination and racism.

Surveillance – does your employer have a right to film you?

With the recent focus on the aged care sector through the aged care royal commission and the ABC’s investigation of aged care, film footage recorded by hidden cameras of nursing home staff mistreating residents has come to light.

ANMF has represented members working in aged care who have been covertly filmed by cameras installed by employers and family members. Some members have expressed concern about the privacy breaches, for them and aged care residents, of being filmed by hidden cameras. But is the practice legal?

The right of employers to monitor workplaces using cameras or listening devices varies across Australia. In Victoria, under the Surveillance Devices Act 1999, a person cannot secretly film another person engaged in ‘a private activity’, meaning an activity that a person would reasonably expect to not be observed. Under the Act, a person cannot install or use a camera ‘to record visually or observe a private activity to which the person is not a party’ without the express or implied consent of each party to the activity. Employers are explicitly restricted from monitoring their employees’ activities in workplace toilets, washrooms, change rooms and lactation rooms.

As workplaces are not considered to be private spaces, generally it is legal for employers to use surveillance devices, except in the ‘private activity’ spaces listed above.

However, nursing homes are a grey area for the Act, as they are both workplaces and residents’ homes, so the general and workplace aspects of the Surveillance Devices Act apply.

On the one hand, in the absence of consent, recording aged care workers helping patients undress or go to the bathroom is likely to be prohibited as these activities are ‘private activities’ for the resident and may take place in a bathroom. If the resident has given express or implied consent to the surveillance then it is not unlawful from the resident’s perspective.

On the other hand, these activities are part of personal care workers’ role and they may reasonably expect that they would be observed in their general workplace. The prohibition on surveillance in a toilet, washroom, change room or lactation room in the workplace may extend to a resident’s toilet in a residential aged care facility, even though the toilet is not for the use of employees. However, there is some uncertainty whether, under the Act, a resident’s bathroom in a nursing home would be considered a workplace.

Resources on social media and codes of conduct

This article first appeared in The Handover January 2020. 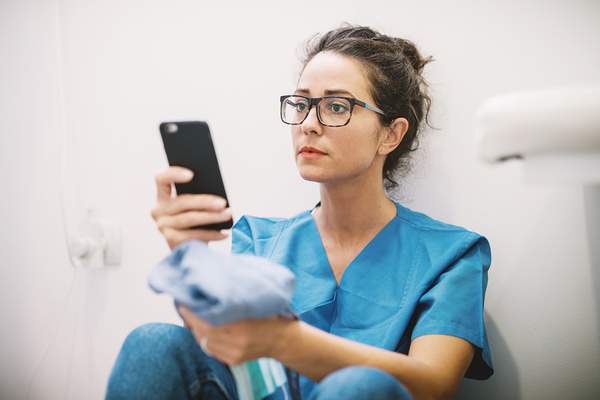 Privacy and confidentiality can lead to thorny issues for graduates

Not your patient, not your business Understanding your scope of practice as a new EN