Victorian public sector nurse and midwife members will receive another three per cent pay rise in the first full pay period on or after 1 December 2022. This is the third three percent pay rise of the 2020–24 EBA.

Many private sector nurses and midwives will also be receiving a pay rise – scroll for more details.

The pay rise means almost all Victorian public sector nurses and midwives remain the highest paid in Australia in the lead up to the negotiations for the 2024-28 enterprise agreement.

The December public sector increase is part of the eight-year wages deal endorsed by ANMF members in 2016. This agreement included a historic wage uplift in 2019 that brought Victorian public sector nurses and midwives into net pay parity with their NSW counterparts, as well as a further nine per cent wage increase between 2020 and 2022. The 2024 public sector EBA is coming

ANMF Job Reps attending recent annual delegates conferences have passed several resolutions about the next EBA claims which include a phased increase to compulsory superannuation contributions from 10.5 per cent to 15.4 per cent, additional annual leave, an extension of weekend rates to include the Friday night shift and a wage increase greater than three per cent.

ANMF Job Reps and HSRs will finalise members’ log of claims at the 2023 Delegates Conference, and will be seeking a further wage increase at the commencement of the new agreement.

ANMF (Vic Branch) uses the public sector nurses and midwives EBA as the benchmark agreement for its negotiations in all other EBAs – including the public sector mental health EBA and the various private acute sector EBAs.

This is why private acute members received the historic 2016-2020 increases (and continue to maintain pay parity or higher rates. This will vary according to the timing of the pay increases – for example, Ramsay members will be higher than public sector members at the end of their agreement.

Ask Paul: How does ANMF come up with a log of claims? 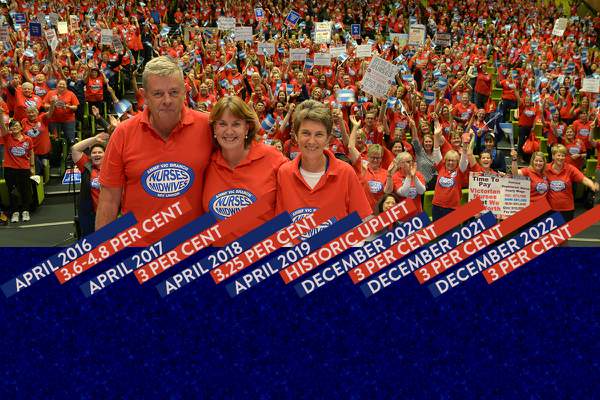