How Victoria got ratios 20 years ago

So it is sometimes surprising to Victorian nurses and midwives that mandated minimum ratios are still seen in some
sectors and countries as a controversial way to roster staffing levels in health facilities.

Employers and politicians have been historically ideologically opposed to ratios.

The importance of ratios is that they in part quarantine much of the nursing and midwifery budget rather than the budget determining the number of nurses or midwives.

California in the US was the first to legislate ratios in 1999, although the ratios did not come into effect until 2004.

So how did Victoria become the second place in the world, 20 years ago — on 31 August 2000 — to secure ratios and the first to implement them?

The context – a nursing shortage crisis

In May 2000, the then ANF under the leadership of Belinda Morieson and Hannah Sellers started negotiating the public sector nurses and midwives enterprise agreement.

Australia had been in recession in the early 1990s. After seven years of health budget cuts, nursing redundancies and bed closures under the Kennett state government, Victoria had a severe shortage of nurses and midwives willing to work in the public health sector.

Approximately 20,000 nurses and midwives were registered in Victoria but were not willing to work in their professions. ANF (Vic Branch) Secretary Belinda Morieson argued the union’s ‘Nursing the system back to health’ EBA log of claims would stem the exodus of nurses and address the systemic reliance on unpaid overtime and a casual workforce.

The first EBA stop work meeting on 12 July was held at the now demolished Dallas Brooks Hall in East Melbourne.

Members angrily rejected the offer from the Victorian Hospitals’ Industrial Association and the new Bracks government which failed to mention ratios.

At a second stop work meeting on 9 August ANF members voted to take industrial action including for the first time, closing one in four public hospital beds and cancelling one in four theatre sessions.

It was the most significant industrial action since the 1986 50-day nurses strike.

The government had initially refused to allow the AIRC to consider staffing levels, but private arbitration meant every aspect of the ANF claims, including the ratios, would be privately arbitrated by Commissioner Wayne Blair.

What happened next was lightning fast. The AIRC had made a commitment to hand down its decision on all EBA matters within a fortnight. At preliminary hearings, eight ANF witnesses including three clinical nurses, a nurse educator, a nurse unit manager and Branch Secretary Belinda Morieson, Assistant Secretary Hannah Sellers and then industrial officer Paul Gilbert (now Assistant Secretary) gave a picture of what it was really like to work on understaffed wards.

Four days of formal hearings, starting on 21 August, before Commissioner Blair were held in Perth due to the Commissioner’s prior commitments. Ms Morieson, senior industrial officer Bob Burrows and Mr Gilbert travelled to Western Australia for negotiations.

ANF staff back in Melbourne worked around the clock to compile evidence and submit 50 witness statements including many from bedside nurses.

The employers and DHHS vehemently argued against the concept of ratios but provided no alternative solution to address excessive nursing workloads.

The fierce opposition to ratios at the time cannot be overstated and continued for more than a decade.

On 31 August 2000 Commissioner Blair handed down his 68-page decision that changed nursing and midwifery in Victoria’s public health facilities.

The decision restored conditions taken away by the Kennett government, such as accrued days off and introduced new improvements such as an improved night duty allowance, professional development leave and a retention bonus.

Importantly, Commissioner Blair agreed with ANF and its members that there was a nursing shortage crisis. He noted that those employers who said the crisis did not exist were in denial. On staffing and recruitment, he disagreed with the employers’ and the health department’s view that staffing was the ‘prerogative of the government’ and noted they had not proposed any alternatives to nurse: patient ratios.

He said ‘Whatever measures (if any) have been put in place by the hospital networks to address recruitment and retention issues, have failed.’

Commissioner Blair outlined a range of ratios from medical and surgical, labour wards, ante- and post-natal wards, accident and emergency, and operating theatres.

He described the ratios, a 12.5 per cent pay increase over four years and improved working conditions as a ‘package’ to address the public hospital crisis in nurse recruitment, retention and workload.

It was estimated up to 1300 additional nurses and midwives would be needed. No one actually knew the total number of the workforce due to the Kennett government fragmenting the payroll system.

The reference to the popular 1992 cult comedy film was how the parties had referred to their earlier meetings with Commissioner Blair when they discussed ‘short-term remedies’ and ‘long-term strategies’ to Victoria’s nursing and midwifery shortage.

‘Wayne’s World’ outlined how nursing’s outdated, strict hierarchical structure and its roots in the army and the church had impeded bedside nurses’ ability to raise workload concerns with senior nursing management. He recommended a process to improve and formalise constructive communication between nurses and management.

The Bracks government had won the September 1999 election on a platform of rebuilding the public health system, including the nursing and midwifery workforces, and addressing the untenable workloads.

Still, 12 months after the ‘Blair decision’, ANF public sector members closed one in three beds during an implementation dispute with the government about numbers. ANF successfully argued there were 1300 vacant positions to fill and then another 1300 extra positions required to fill the new ratios.

ANMF public sector members took significant industrial action to save ratios in 2001, 2004, 2007 and 2011/12. The Andrews Government legislated ratios in 2015, passed new and improved ratios in 2019 and introduced a bill to further improve ratios in June 2020 as part of its 2018 election commitment.

This article was first published in the July 2020 edition of The Handover. 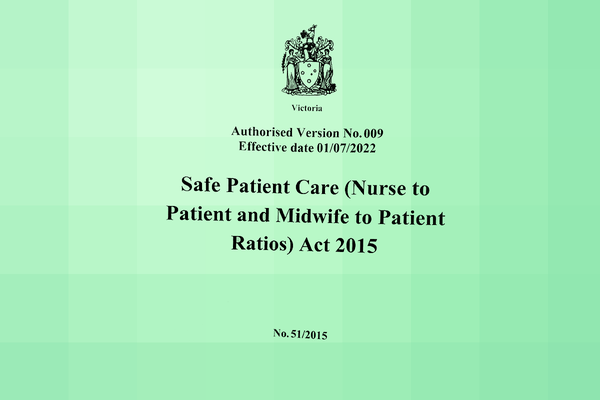