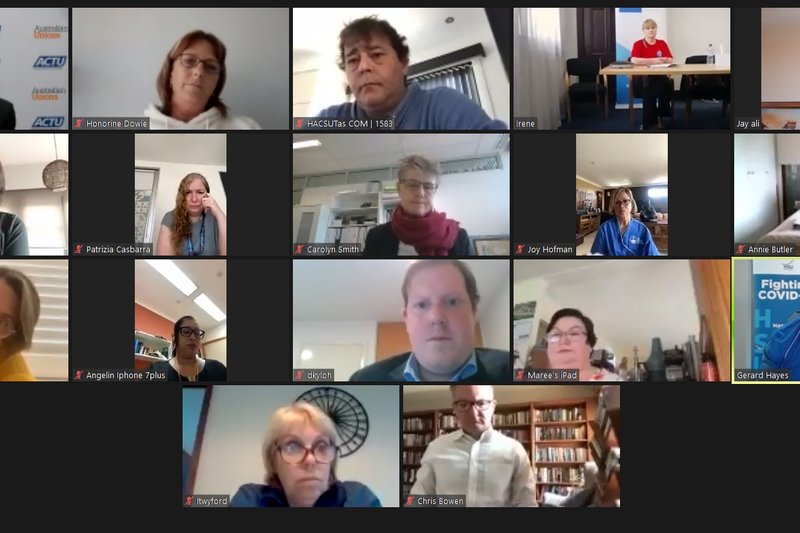 Union representatives and MPs gather at an aged care rountdable

ANMF has joined forces with other unions representing aged care workers across Australia and the ACTU to lobby the Federal Government to fix aged care.

Recent COVID-19 outbreaks in nursing homes– the vast majority in private aged care homes which are overseen by the Federal Government – revealed the cracks in the Australian aged care system.

Despite the ANMF members campaigning for staff to resident ratios to improve the safety of resident care for nearly three decades, chronic and widespread understaffing across the aged care system have created unsafe environments for both workers and those they cared for.

‘The COVID-19 pandemic has revealed just how dangerous understaffing is, with tragic consequences for far too many older Australians and their families,’ ANMF Federal Secretary Annie Butler said.

‘Now, more than ever before, the pandemic and its devastating effects in aged care, have demonstrated that mandating minimum staffing levels must be an urgent priority, as part of any lasting reforms of the sector. If that doesn’t happen, safe, quality care cannot be guaranteed and the pain and suffering of elderly Australians will go on,’ Ms Butler said.

Just days after the Aged Care Roundtable, ANMF and the Australian Medical Association (AMA) wrote a joint letter to Prime Minister Scott Morrison asking him to take action to prevent further COVID-19 outbreaks in aged care, almost a year to the day after their initial call to the Federal Government to fix the broken aged care system.

Sign the petition calling upon the Federal Government to take action to fix the aged care system.